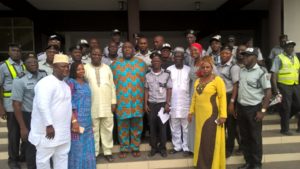 As part of efforts to reposition the Lagos Central Business Districts to meet the Smart City Status of Lagos, a training programme has been organised to hone the skills of enforcement officers operating within the district.

Speaking at the event held at the Adeyemi Bero Auditorium, Alausa Ikeja, the outgoing Special Adviser, Mr. Agboola Dabiri said it is important that the Lagos CBD continually train and retrain its operatives to meet the growing challenges of the Lagos Island.

Dabiri noted that development programmes are being initiated within the district to attract investments opportunities to Lagos Island and emphasized the need for CBD operatives to adequately prepare for the challenges of the ever-increasing population visiting the Lagos Island Business District daily.

He expressed optimism that the regeneration and redevelopment plans introduced during his tenure as the Special Adviser will be sustained and improved upon.

While seeking the cooperation of the officers for his successor, he advised them to be diligent and dutiful as well as shun activities that could bring the name of the CBD to disrepute.

Dabiri was presented with a gift by the Commanders of the CBD Enforcement Unit in recognition of his contributions to the growth of CBD while awards were presented to five officers of the organisation for outstanding performance.