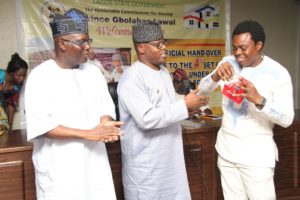 The Lagos State Government has presented keys to 150 new homeowners under the Rent-to-Own Policy, thereby increasing the total number of housing units already allocated to Lagosians under the Scheme to 650.

Speaking today at the hand-over ceremony to the 4th set of allottees of the Rent-To-Own Housing scheme, the State Commissioner for Housing, Prince Gbolahan Lawal explained that the State government was not just providing accommodation but using the various housing schemes as major means of economic empowerment for residents of the State, especially young people.

According to him, the Scheme is aimed at ensuring that all Lagosians irrespective of status, income and affiliation have access to decent and affordable housing in order to improve their quality of life.

He said, “Under this policy, all that prospective homeowners need do is make a 5% commitment fee, take possession and pay up the remaining balance towards the ownership of the property over a period of 10 years.”

The Commissioner informed that a larger number of Lagosians who could not hitherto boast of being homeowners are now proud beneficiaries of housing units under the Rent-To-Own Scheme. 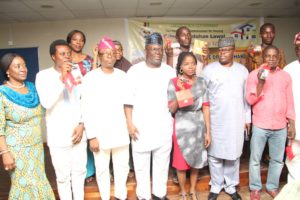 Lawal stated that apart from the ‘Rent-To-Own’ policy, the State Government had also designed some other innovative means of addressing the housing deficit across the State.

In his words, “Other efforts being put in place by the Governor Ambode led administration to make housing more readily available to Lagos’ teeming residents include the Lagos Affordable Public Housing (LAPH) Initiative. This is a joint venture arrangement between the State Government and the private investors aimed at constructing 20,000 housing units over a period of four years”.

He also revealed that plans for a Rental Housing Programme targeted at persons with a regular source of income but are only interested in home rental than ownership and do not have the required 5% commitment fee for the Rent-To-Own programme is also on course and would take effect soon.

Earlier, the General Manager of the Lagos State Mortgage Board, Mr. Dehinde Tunwashe reminded the allottees of the need to ensure prompt payment of their monthly rent to encourage the State government to provide more houses for people of the State.

He solicited the support of the allottees to cooperate with the facility Managers and ensure that the facilities in the Estates are put to use for designated purposes.

“Efforts should be geared towards ensuring that the estates’ environments are kept clean at all times. The allottees should ensure that all safety precautions are strictly adhered-to in a bid to prevent fire outbreak or any form of disaster”, Tunwashe added.