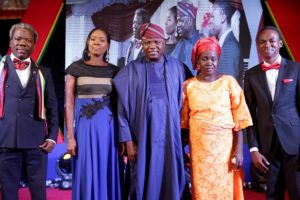 Lagos State Governor, Mr Akinwunmi Ambode on Monday evening urged civil servants in the State to continue to give their best to raise the bar of excellence which the State Public Service is known for, saying such was important to keep the State working efficiently.

Speaking at a special dinner to honour outstanding public servants in the State held at Lagos House, Alausa, Ikeja, Governor Ambode said Lagos was working because of dedicated and diligent public servants who, according to him, are daily working to make life comfortable for residents and investors.

“The Lagos State Public Service has set a standard which others are trying to emulate. We have put in place a reward system that will encourage healthy competition/rivalry among public servants. We believe strongly that this is one of the ways employees can be motivated to put in their best at all times.

“As we celebrate our public servants, there is still a lot of work to be done. We have set a standard for others. We must not only maintain that standard but raise it another notch,” he said.

He commended the commitment of the workforce across the Ministries, Departments and Agencies and also the 20 Local Governments and 37 Local Council Development Areas (LCDAs), assuring them that his administration would continue to provide a conducive environment for them to perform their duties optimally.

“We have gathered here this evening to, in a small way, thank and recognize our public servants, the unsung heroes in our State’s growth and development. I am privileged to have been on both sides of the divide and so I understand the life of a public servant.

“Our State is working because the Police Force, the Army, the Navy and the Airforce are working together to ensure our security and give investors confidence to do business in our State,” Governor Ambode said.

He said though the life of a public servant was that of selfless service, self-sacrifice, diligence, hard work and thankless work, but that however thankless the job is, it must be done and done very well, just as he specifically charged public servants to keep Lagos working.

While congratulating the 90 recipients of the outstanding officers’ award who emerged both from senior and junior categories, the Governor admonished them to see the development as a challenge to maintain and improve on the high standard which qualified them for the recognition.

“This recognition is a challenge for you to maintain and improve on the high standard for which you are being recognized. The State is in need of more high flyers like you to accelerate the delivery of quality service in all sectors for the benefit of all residents of our State.

“As government, we will always work to ensure a conducive work environment, provide state of the art facilities and exposure of our people to best practices through training and retraining,” Governor Ambode said.

In addition to the plaques and certificates given to the outstanding officers, the Governor directed the Head of Service, Mrs Folasade Adesoye to come up with recommendation on financial reward for the officers, while a framework would be put in place to institutionalize it based on ratification by the State Executive Council.

Besides, Governor Ambode said as part of the reward system for civil servants, arrangements were being firmed up to transform the former Car Park in Alausa to Public Service Plaza to be managed by the Civil Service Club, adding that facilities to be enjoyed at the plaza would include Swimming Pool, Lawn Tennis Court, Five-aside Football Field, Gym, Daycare Centre, Library, Corporative Club to sell things cheaply for civil servants and Cafeteria, among others.

In her opening remarks, Adesoye said the award dinner was a befitting grand finale to the week-long 2018 Public Service Day Celebration, an annual event being celebrated since 1994 following a resolution by the Conference of African Ministers of the Civil Service, to appreciate the contributions of public servants to governance, public service delivery and humanity.

She lauded Governor Ambode for the various initiatives to support and appreciate civil servants in the State, expressing optimism that the recognition of outstanding officers would spur others to continue to put in their best knowing that their contributions would not go unrewarded.