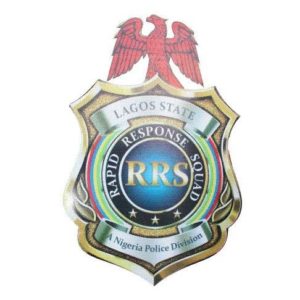 The Lagos State Anti-Crime Outfit, the Rapid Response Squad (RRS) has intensified its security patrol and operations across the metropolis with the foiling of four armed robbery attacks and rescue of 11 victims in different parts of Lagos State.

It maintained that such partnership aided the foiling of an armed attack by a gang of robbers on residents of Oke-Afa, Ejigbo and AIT area in Alagbado on 1st and 2nd of June, 2018 respectively, stressing that motorized patrol and monitoring had since been intensified in such areas.

According to the report, “On the 1st of June, 2018, there was a distress call from the Controller that there was a robbery operation at No. 12,Ezeagu Street, Oke-Afa, Ejigbo. In a swift response, RRS operatives and other law enforcement agents raced to the scene to foil the attack as the robbers took to their heels”.

“On 2nd of June, 2018, distress call was received of a robbery operation at AIT area of Alagbado, Lagos. The RRS patrol vehicle swiftly responded to the scene to foil the attack by the armed robbers who then took to their heels”, it added.

On other life-saving activities of the regiment, the report noted that the squad had also participated effectively in the rescue of 35 fire incident and 25 accidents victims in the month under review.

The report hinted that as part of strategies to strengthen its operations in Lagos, personnel have been instructed to ensure timely response to all distress calls received on the States toll-free lines.

It added that the squad has spreads its surveillance activities across all local governments in the State to deter street-urchins and thieves from causing civil disobedience while also arresting motorcyclists plying prohibited routes.