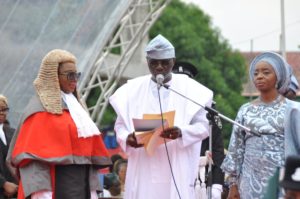 Governor Babajide Olusola Sanwo-Olu on Wednesday officially took over as the 6th democratically elected Governor and 15th Governor of Lagos State, promising to walk the talk and make the State even greater.

Sanwo-Olu was sworn-in by the State’s Chief Judge, Honourable Justice Opeyemi Oke at exactly 11:32 am, shortly after his Deputy, Dr. Kadiri Obafemi Hamzat took the oath of office amidst cheers from the massive crowd at theTafawa Balewa Square, Onikan.

Immediately after inspecting the Guard of Honour, the Governor delivered his inaugural speech, tagged ‘Awakening a Greater Lagos’, saying that the change of guard in the State marked the beginning of a new chapter in the journey to greatness and sought the support of the people of the State   to take Lagos to greater heights.

“When we speak of a Greater Lagos, we speak not empty words. It is a deep and profound assertion we mean. We intend to make history by making for ourselves and our children a better future,” he said.

“Therefore, on this day, on this precious land we call our home, let us stand together in the very face of history. Let us vow to ourselves and to posterity that we shall not just dream of a Greater Lagos. Let us agree this day that we shall collectively rise up to build the Lagosof our dreams,” he added.

While acknowledging the myriad of challenges confronting the State, Sanwo-Olu admonished the people not to be discouraged, adding that an opportunity had been presented to forge ahead in the quest to surmount the drawbacks and move forward.

The Governor said the story of Lagos Statehad been that of successes and achievements, emphasising that since 1999 the tradition of progressive governance has set Lagos apart and strengthened people’s belief in the ideology as designed and executed by successive administrations of Asiwaju Bola Ahmed Tinubu, Mr. Babatunde Raji Fashola and Mr. Akinwunmi Ambode.

Giving details about his plans, Sanwo-Olu said: “Today, I stand before you as your Governor, but also as your friend, brother, neighbour and your servant. I stand here to ask that you join me to script and fashion this greater Lagos with the creativity of our minds”.

“As your Governor, I know fully well who I am, because I know where I am from. More importantly, I know where I am headed. I have been a part of this progressive journey since its very inception. I know first-hand the concerted efforts that went into planning so many of the innovations we now see and enjoy,” he added.

The Governor further stated that: “It will be my job to continue that process by refining and perfecting the foundation laid by the preceding administrations. In this regard, I shall forever remain loyal to the aspirations of the people and to the developmental blueprint that has brought so much success to our dear State”.

Sanwoolu pledged that he will remain himself and be steadfast in all his endeavours, saying: “the Babajide Sanwo-Olu you see today shall not change and try to become something I am not. My prayer is only that I grow and improve as your Governor to implement good policies and bring the prosperity you deserve,”.

Describing Lagos as Nigeria’s door to the global economy, Sanwo-Olu said that his goal would be to advance the social and economic progress of the State and its people regardless of faith, social class, or origin of birth, assuring that his door shall remain open to all.

According to him, a framework tagged “THEMES” had already been formulated in six strategic areas namely, Traffic Management and Transportation,  Health and Environment, Education and Technology, Making Lagos a 21st Century Economy, Entertainment and Tourism as well as Security and Governance.

The Six Pillars of Development, he said, “represent our response to the yearnings of the people. They constitute the foundation that must be restored for future generations. And should we fulfill our promise and deliver on the pillars, we are most confident that we will have succeeded in setting Lagos on a new trajectory of economic growth and development that would be unprecedented in our entire history’’.

Sanwo-Olu promised that his administration would ensure transparency, the rule of law and fiscal discipline as well as create the right environment that guarantees security and safety of lives and property of Lagosians.

“Our ultimate goal would be to ensure thatLagos State remains one of the top destinations on the African continent to live, work and invest in.

While promising to give utmost priority to the welfare and socio-economic wellbeing of civil servants, youths and the women in his administration’s developmental programmes, he urged the people to play their parts in taking the State higher.

“I implore us all as Lagosians to rededicate ourselves to contribute our individual quotas positively and responsibly in this new drive to reform our society and take it to a higher pedestal.

“We must imbibe the spirit of being our brothers’ keeper in our daily lives at home, work, recreational places and worship centres and most especially on our roads,” he stated.

He also stressed that “Every Lagosian has a role in this government”, while also pledging that as elected officials his administration will play its part towards the emergence of a greater Lagos.

He said the inauguration was in accordance with the Constitution which provides for the election of leaders every four years, noting that the day would remain indelible in the history of the State.

“As the new administration takes office in Lagos State for the next four years in accordance with the provision of Section 180 of the 1999 Constitution of the Federal Republic of Nigeria (as amended in 2010), this day shall remain momentous in the record books because generations of Lagosians will mark today as a watershed in the continued march of Lagos State towards its glorious destiny of socio-economic development as one of the greatest cities in the world,’’ the HOS said.