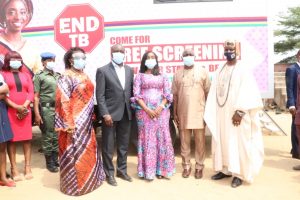 . . . As Vans Will Move Around Lagos To Screen Residents

The mobile x-ray vans, which will move around the State to provide prompt chest x-ray services and effective diagnosis of TB within communities, were manufactured to specification and are adequately equipped to effectively provide comprehensive on-site screening, diagnosis and treatment for TB.

Speaking at the launch of the specialised vehicles, held at the Evans Square, Lagos Mainland Local Government Area, Mrs. Sanwo-Olu said the Mobile X-Ray vans were acquired by the State government in furtherance of its determination to explore innovative, efficient and latest practices in health care service delivery.

She disclosed that the State Government has also acquired 18 State-of-the-art X-Ray machines evenly situated in 18 health care facilities across the State for TB Chest x-ray screening, adding that citizens can visit any of the facilities and get screened for TB, free of charge. 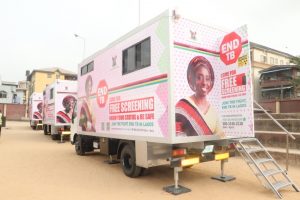 “It is hoped that the introduction of this Chest X-ray screening will bridge the gap of inadequate logistics for TB diagnosis, improve childhood TB diagnosis and ultimately bring TB diagnosis and care to the door steps of Lagosians. A total of 38,277 TB cases were missed in Lagos State in 2019 and it is hoped that the introduction of Lagos TB Chest X-Ray screening will drastically reduce the number of missed TB cases in subsequent years”, Dr. Sanwo-Olu said.

While noting that the TB case notification rate has progressively increased over the years in Lagos State, the wife of the Governor, who is also the State TB champion, disclosed that Lagos has over 1,249 TB Direct Observed Treatment (DOTS) centres geared towards increasing access to care across the 20 LGAs and 37 LCDAs. 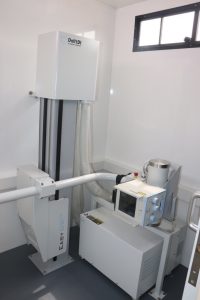 Dr. Sanwo-Olu, however, appealed to citizens not to stigmatise anyone suspected of having TB but rather help them seek access to diagnosis and treatment at any of the DOTS centres close to their home.

Speaking earlier, the State Commissioner for Health, Prof. Akin Abayomi, said the State Government is resolute in ensuring that Lagosians are appropriately empowered to become responsible for their health and well-being while taking all necessary precautions to ensure active involvement in the fight against communicable diseases such as Tuberculosis.

Abayomi, who was represented by the Permanent Secretary, Ministry of Health, Dr. Olusegun Ogboye, said awareness, early detection and prompt treatment are key to favourable outcomes, noting that it is imperative to prevent and reduce the burden of TB through these parameters. 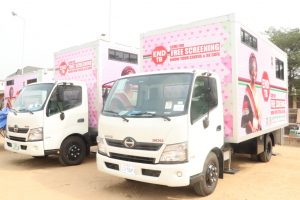 He explained that chest x-ray has historically been identified as one of the primary tools for detecting Tuberculosis(TB), especially pulmonary TB, adding that in the developed world, mobile mass radiography has been employed as a strategy for TB screening with resultant coverage of a huge proportion of the population.

“It has been proven that chest X-ray, isolation of people with infectious TB and provision of TB treatment could significantly reduce the community’s TB burden. These Mobile X-ray vans will be moving around the State to screen people, provide prompt CXR services and effective diagnosis of TB within the communities”, the Commissioner said.

Present at the event were Chairmen of Lagos Mainland LG and Yaba LCDA, Mrs. Omolola Essien and Mr. Kayode Omilabu as well as representatives of TB partner organisations