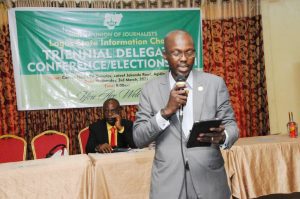 The Nigeria Union of Journalists (NUJ), Lagos State Information Chapel has sworn-in Mr. Debo Adeniji as the new Chairman of the Chapel after emerging winner in the Chairmanship election conducted on Wednesday at the Combo Hall, Lagos Television, Ikeja.

Speaking during the swearing-in ceremony of the new executive members, the Chairman, NUJ, Lagos State Council, Mr. Leye Ajayi, urged them to uphold the ethics and standards of the profession and ensure they are good Ambassadors and Role Models of the body.

Ajayi said the foremost standard of the profession which is truth and fairness should be inculcated in the agenda, programmes and actions of the Executive team, stressing that it is essential to achieving a healthy and integrated union.

“All of you must be guided with the Constitution of the Nigeria Union of Journalists and to let it reflect in carrying out various programmes and activities of the Chapel. You should all get a copy of the Constitution and use it as essential guidance in all your activities”, he said.

In his acceptance speech, the newly sworn-in Chairman of NUJ Lagos Information Chapel, Mr. Debo Adeniji, affirmed his commitment to delivering the mandate given through his emergence as the Chairman and winner of the election.

“We wholeheartedly accept this mandate with extreme gratitude to you for the confidence reposed in us. Our emergence is an eloquent confirmation of the fact that you believe in our ability and capacity to deliver, and we shall not let you down”, he said. 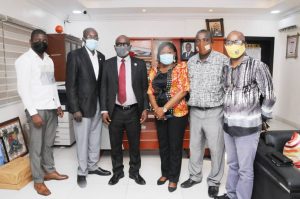 The Chairman explained that the mandate is clear and unambiguous and it is to return the Union to its past glory, where Love, Passion, Commitment, Mutual Understanding and Due Diligence cohabit.

Speaking further, Adeniji assured members of the Union of guiding the mandate jealously in order to save the beloved Union from disintegration, adding that there is a need for all hands to be on deck to surmount the task ahead and ensure the progress of the Lagos Information Chapel.

“Let me assure you great members and leaders of our Union, that by the grace of God and with all hands on deck, we shall guide the mandate jealously, in order to save our beloved Union from disintegration because we have a gigantic task ahead of us in moving Lagos Information Chapel forward”, he said.

The Chairman informed that his administration intends to achieve the set goals and objectives, especially its “Rebuild, Reposition and Regain” agenda, by setting up steering committees that will liaise with members of the Union to determine the best way to move forward.

While soliciting the support and cooperation of members of the union for the new administration, Adeniji assured them of putting issues of Training and Re-Training of Members, Welfare and Reconciliation with aggrieved members among others on the front burner.

The new Chairman acknowledged his formidable co-contestant for the Chairmanship position, Mr. Jamiu Hassan, saying both of them are eminently qualified to lead the Union.

His words: “I wish to thank my formidable opponent in the very competitive election with the full knowledge that both of us are greatly qualified to lead the Chapel. I, hereby, extend my hand of fellowship to him and all his supporters. Let us put this election behind us and work together to move our great union forward”.

He also thanked the management of the Ministry of Information and Strategy, as well as the outgoing Executive Members for laying a solid foundation to build on.