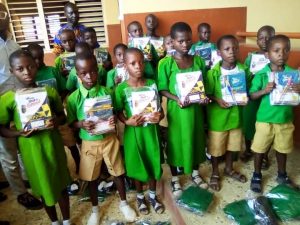 Idera Dee Foundation has distributed educational materials to some indigent pupils in Epe as part of its vision to ensure that the poor and vulnerable have access to qualitative education.

The distribution was handled by a team led by Mr. Giwa Azeez and visited about 11 schools, where 20 most vulnerable pupils were given the materials consisting of School Uniforms, School Sandals, Exercise Books, Mathematical Sets, Pens, Erasers and Pencils with the support of the school authorities.

Speaking with Pressmen on behalf of the donor, Mr. Giwa Azeez said the motive of the philanthropist was to ensure that the children of the less privileged also put on neat and good school uniforms like their privileged counterparts and have all the necessary educational materials for their classwork.

“With this, the pupils would be motivated while their parents would also be financially relieved and I urge the rich in Epe to emulate Mr. Agbaje in order to reduce illiteracy in Epe”, he stated.

Also, the All Progressives Congress( APC), Councillorship Candidate for Ward A2, who was the former APC Organising Secretary, Mr. Abdul Hameed Oluwasegun revealed that this was the second time that less privileged pupils in the society were supported, through this gesture, by giving to school Pupils educational materials.

In his words: “I believe this little contribution to the sector would produce more leaders of tomorrow. I promise to tread the path of Mr. Agbaje in order to give better dividends of democracy to my people in Ward A2 if elected on July 24th, 2021 to represent them at Epe Local Government Legislative House”.

In the course of the visit, the team inspected projects rehabilitated and facilitated during  Mr. Agbaje’s administration as the Chairman of Epe Local Government.

Also, an educationist, who simply identified herself as Joy, appealed to the team to extend the gesture to the pupils of Oriba community.